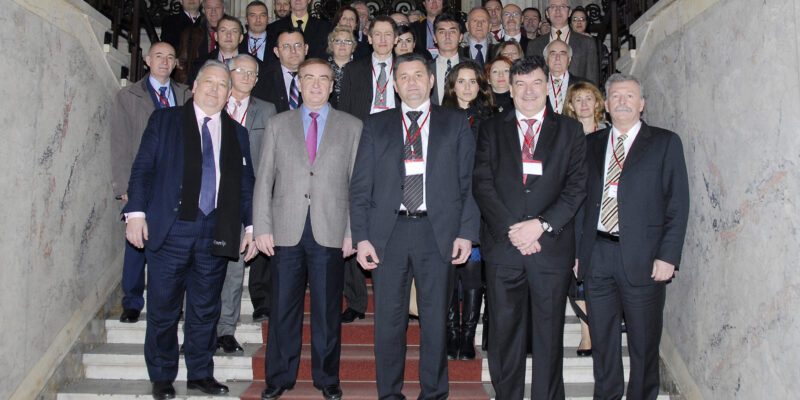 An alliance of a significant majority of companies in the rail operating community and other stakeholders in the Balkans and South East area of Europe was launched in Belgrade, Serbia. Uniting some 70 delegates representing some around 30 companies and from 14 countries, the SEESARI initiative arrived on the scene on 27 January 2016. With the high level support of Zorana Mihajlović – deputy prime minister of Serbia and Minister of Transport, Infrastructure and Spatial Planning and many CEOs from the area, the Serbian JSC and their Director General, Miroslav Stojčić hosted this unique gathering.

With a specific focus on rail and in close cooperation with a wide range of stakeholders, SEESARI will act as an innovation vehicle that will identify opportunities and energise development of the transportation network in South Eastern Europe (SEE).The SEE Area is a key strategic gateway to and from not only the rest of Europe but also to the Middle East and Asia.

The meeting was chaired by Nenad Kecman Executive Director of Serbian Railways JSC assisted by Blaz Jemensek of the Slovenian Railways Prometni Institute, Zeljko Valentic Director International Relations at Serbian Railways and Simon Fletcher Coordinator Europe, UIC. In her opening address Minister Mihajlović spoke of the importance of rail to her government innovation and investment and that this is not only about shiny new trains that can be seen by the customer but is just as importantly focussed on having sustainable, resilient infrastructure in place. In his address to the meeting Mr Stojčić welcomed all the delegates to Belgrade and followed the Minster’s words regarding the importance of rail and its infrastructure by announcing the development of the project that will see the construction of a high speed line between Belgrade and Budapest. It is the stated objective of SEESARI partners that there is a need to establish a strong and well connected rail transport system that realises the Europe-wide goal, as set out in Challenge 2050 and the Rail Technical Strategy Europe (RTSE), of an attractive and efficient future European rail system. In his address to the meeting, UIC Director General Jean-Pierre Loubinoux highlighted the importance of a collaborative approach and that there is strength through unity.

The huge significance of SEESARI is that it is helping to build bridges and break down walls and that the end result will be a more interoperable rail network that is truly acting as the transport backbone of the SEE Area and contributing to the greater mobility and economic objectives of Europe. He offered the maximum possible support of the UIC HQ team in assisting the SEESARI team to achieve their ambitions. SEESARI will be a voluntary network and the meeting supported Dr Peter Verlič (Slovenia) who had done a significant amount of preparatory work for the event, as the first SEESARI chair. Doctor Verlič outlined the next steps for the alliance and underlined the significant challenge that a venture of this nature presents.

The members may be transport operators, infrastructure managers, manufacturers and suppliers of technical equipment, financial institutions, research institutions, associations and interest groups connected with (rail) transport, national and regional authorities, NGOs and other institutions and administrations from a wide range of interested stakeholders from the SEE area (countries from SEE area in alphabetic order: Albania, Bosnia and Herzegovina, Bulgaria, Croatia, Greece, Hungary, Macedonia (FYROM), Moldova, Montenegro, Romania, Serbia, Slovenia). It will also include countries with transport corridors connected to these SEE countries and some were present at the meeting including Turkey and Austria.

In order to achieve SEESARI’s goals and objectives, the partner organisations have agreed to the signing of a Declaration of Establishment. The document sets the structure and was symbolically signed by the DG of Serbian Railways JSC, the DG of the UIC and the Chairman of SEESARI.
The partners will collaborate both with bespoke projects as well as where possible supported by external funding sources such as possibly those of the European Commission, European Investment Bank, European Bank of Regional Development, World Bank and others to development the necessary innovation of the rail system of the future.

It is intended to create a kind of PPP that will be the mechanism within which the partners will operate and through which external funding sources will be identified. It is clear that with these 14 visionary countries and in excess of 30 engaging companies developing sound project proposals, there will be some encouragement upon financial institutions to see the SEE Area for the potential that it has. The partners involved are ambitious but are also aware that success will depend on well-measured, prioritised development that will harness the energies of the stakeholders and bring tangible benefits.