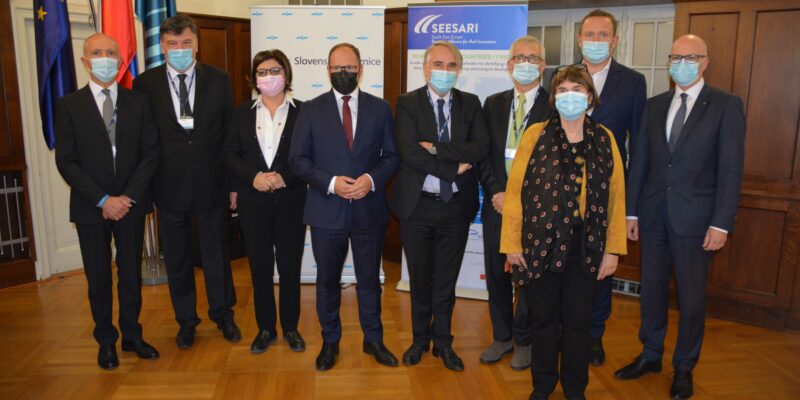 It’s not every day that the arrival of a train is greeted by the sound of a brass band, but this is exactly what happened in Ljubljana on 24 September. At precisely 08.46, the train pulled into platform 3 to be greeted by dignitaries from Ljubljana City Hall, as well as the Director General of SŽ Slovenian Railways Dušan Mes and EU Transport Commissioner Adina Vălean.

After some statements for the media, the assembled guests listened with interest to the speeches from Mr Mes, as well as Slovenian Infrastructure Minister Jernej Vrtovec and Commissioner Vălean, who welcomed the significant progress being made on the Divača-Koper second track project. The project will double capacity on this already saturated line and will increase the ability to shift many more tonnes of freight to and from the port of Koper on the Adriatic.

With innovation, the Green Deal and digitisation firmly on the agenda for the day, the delegates were invited to attend the SEESARI (https://seesari.org/) conference entitled “Green and Digital Transformation of Railway Corridors”.

The event was divided into two parts, the first of which was “Digitalisation in transport”, with presentations on “Shaping the Future Railway” by François Davenne, “European Railway Ticketing by 2030” by Blaž Pongračič, CER, “Europe’s Rail in the World of Tomorrow” by Carlo Borghini, Shift2Rail Executive Director, and “SEPA – Opportunities and Challenges in Public Transport” by Nelson Šorgo of SEESARI.

In particular, Mr Davenne highlighted the fact that future transport must be safe, efficient and frugal; it must be “green”. Rail is six times more energy efficient, emits nine times less CO2 and significantly reduces the number of road casualties. He said: “If we look at the big picture, we are already part of the solution for decarbonising transport if we can achieve a massive modal shift.

We have ten years to implement the UN strategy: avoid, shift, improve, and it is a very short timeframe. To quote JM Keynes: “In the long run, we will all be dead”. This quote has never been so true, especially after the latest IPCC report. I would say that the central issue will be how to select the transformational projects able to reshape the current mobility paradigm in the short period of time that is still left before we damage our climate without remedy. Digitalisation – as it will lead to seamless interconnection with other modes and capacity increase on existing infrastructure – has a central role to play here. Digital projects will be a driver for modal shift to rail and public transport in order to achieve the objectives of the SDGs fast enough to have an impact”. He then highlighted a number of practical use cases.

Concluding his speech, Mr Davenne said: “Applying the hierarchy of avoid-shift-improve strategies with integrated and intermodal digital approaches is central to reaping the full benefits of transport decarbonization, thhough it is ultimately behavioural changes that will ensure the success of decarbonisation measures in the long term. For that, the virtue of frugality has to be re-discovered, since rail is frugal by nature:

This was followed by the SEESARI General Assembly at which, amongst other key decisions, the members agreed to appoint UIC Honorary Director General Jean-Pierre Loubinoux as Chairman of SEESARI.

Video presentations of the speakers on this link